I just did a 4 month grow with new weed bag seed; you can forget about using bag seed from modern weed.

All the plants started flowering under 24 hour light.

All the plants grew small buds and the weed sucked.

I’ve been traveling in my 2001 Chevy Express High Top Conversion van with Ricky, my 4 year old American Bulldog/Staffordshire Terrier mix, for the past year which has been really great. We’ve done over 15,000 miles and visited 23 states. I’m stuck home for the winter because I ran out of money.

What’s not so great? I haven’t been able to grow any weed and have been buying it in Colorado. The price hasn’t been too bad, $85.00 per ounce out the door at the Green Dragon weed store, but still, I can grow it for around $30.00 per ounce indoors and as low as $15, depending on how much I grow.

Note: I also get THC vape cartridges, $25.00 per 1 gram cartridge at the LivWell weed store while in Colorado. I think that’s a good deal.

Another Note: Black Market weed in the Midwest is around $225 per ounce which is the around the same price as illegal online weed. What a rip. The Black Market and online guys are cleaning up because my cost is actually more than their cost and they can get away with the high retail price because the legal medical and/or recreational weed in the mid-west is sold even higher than $225.

To be able to legally sell home grown weed would be so awesome but will never happen as long as the government has their claws in the industry. IMO, the worse thing to happen to marijuana is making it legal and controlled. It doesn’t need control or legalization, it needs nothing except be taken off the DEA list of drugs.

I’m stuck back at home for the winter saving money until we can hit the road again. Since I’ll be here for a while I started growing, popping my seeds the first week of November 2021.

There are a few things different with this grow.

I’ve been buying my seeds retail from Robert Bergman for several years now and I recommend him because I know you won’t get ripped off as they guarantee their seeds as well as delivery. All you have to do is contact them if you have a prob.

As you know, your electric cost is the number one expense when growing indoors at home. After analyzing my electric bill, it’s gone up about $50 per month since I stated growing. I’m using five, Mars Hydro 1000 watt white LED lights, and two, 300 watt older fashion purple LED lights along with 2 timers and a fan.

I started 10 bag seeds and they all popped. My plan was to let the seedlings grow until I could take one or two clones from each. Then I’ll mark the pots the mothers and their clones are growing in with the same number.

Using my grow tent I started to flower the clones using 12 on 12 off lighting so I could identify the males and females while their mothers were growing in another room in the veg cycle. I won’t lose any time doing it like this. You could also flower all the plants. You’ll be able to identify the males from the females then revert the females back to the veg cycle to continue growing.

First thing I noticed were five mothers in the veg cycle were starting to flower. I’m not an expert on auto flower plants but from what I’ve read, seeds from auto flower plants aren’t necessarily female, won’t produce plants that automatically flower and will most likely grow into hermaphrodite plants.

All the seed was from retail pot purchased in Colorado over the past few years. All I can surmise is that retailers are selling weed grown from auto-flower seeds. It’s surprising to me because IMO, over all, AF are a pain to grow, have less THC and the plants are smaller with lighter yields.

Out of the 5 mothers left, two were males and three were females. I was able to get six clones from three mothers and those will grow in the grow tent under 20 hours on and four hours of light off while their mothers are in their third week of the flowering cycle using 12 hours of light on and off.

The clones from the auto mothers started flowering so they are sharing a 2-1/2 gallon pot. I moved them into the flower room and we’ll see how they do. I can’t split them up because I don’t have enough soil mix and I don’t want to buy any.

As it stands right now, from 10 bag seeds, I have the 4 original auto mothers plus 4 auto clones plus 3 females growing under 12/12 lights. I’m using four, Mars Hydro 1000 watt, white, LED fixtures and two, older Mars 300 watt purple fixtures for the flowering room. IMO the Mars 1000 LED fixture is a great deal. I’ve been using them for 2 years and they work perfectly.

In my grow tent I’m using one, Mars Hydro 1000 watt fixture. There are seven, five week old female clones. They will be in the veg cycle until they reach about 42” or so then I’ll switch to 12/12 light and start the flower cycle. I would like to veg my plants longer but because of limited ceiling height I have to be careful.

All the clones started flowering so I have them under 12/12 light. I’ve been harvesting the other plants and they are all leafy, not very sticky and frankly the weed blows. I barely get a 10 minute buzz.

This is a shame and we are all being forced to buy seeds.

1 Response to "New Weed Bag Seed Forget About It" 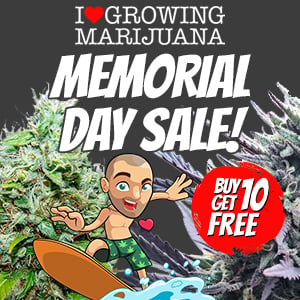